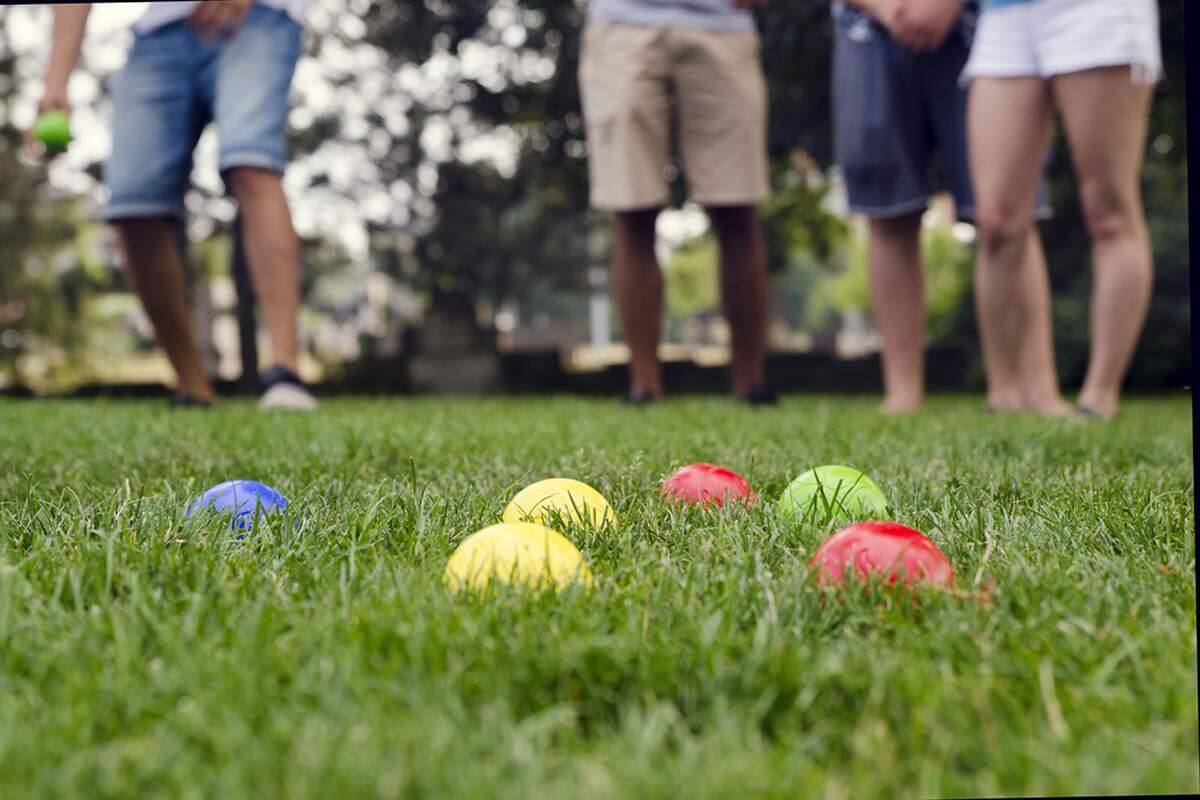 Where to find popular outdoor games this summer

If you grew up in the days of kids disappearing through the screen door in the morning, not to be heard until hunger pangs called you home, you remember games. Red Light Green Light, Mother May I, Dodge Ball and Freeze Tag, Red Rover, Hide ‘N Seek and Blind Man’s Bluff. The whole block of kids would congregate on the street or on someone’s wide lawn and any kid on two legs could get in on the action.

Outdoor games were not just for children. The adults had their badminton, horseshoes, pétanque, lawn bowls and croquet to brighten up those early evening hours as the sun sank into the sky, the heat subsided and everyone relaxed with the tinkling of the ice in a tall tiki glass or the pop of an ice cold Schlitz in the bottle.

At a time when it seems like everyone is lost in their own digital world curated by algorithms and virtual games, backyard games are surprisingly resilient.

Darren Turbeville, owner of Toy B Ville in Petaluma and Napa, said his best customers for outdoor entertainment are young adults and seniors, perhaps looking to bring their grandchildren a bit of the magic. they have experienced while playing outside.

“It’s usually the grandparents who come to buy tons of zip lines, swings or balls to play the children outside. Grandparents are some of my best outdoor customers,” he said. “They want to see their grandchildren running, screaming and having fun.”

Toy stores and online retailers from Wayfair to Amazon carry a host of outdoor fun, from the newest inventions like inflatable play sets to new iterations of old favorites like the traditional Cornhole beanbag toss, all aimed at getting people in the yard to play together – and in person no less. At the same time, traditional indoor games have been transformed into outdoor attractions. The Connect Four, Jenga and Yahtzee variants no longer require a table but a patio or lawn to play.

Many recent studies have pointed to the health benefits of spending time outdoors, yet children are spending less time outdoors than previous generations. With summer on the way this weekend, there’s a chance to infuse your family with vitamin D by turning your backyard — or front yard — into a playground.

Turbeville, the father of three sons under the age of 5, instills in his boys the same love of outdoor play he had growing up on a small farm in Alexander Valley.

“I still have a blocking game with classmates from 8th grade,” he said, revealing that when he met an old friend at the supermarket, he tagged them. He also remembers many games of darts and croquet – his father and grandfather were both golfers.

But you can start playing kids at an even younger age, he pointed out, with the big three fundamentals of outdoor fun – a toy truck, a set of gardening tools from the child size and something with which to catch and capture insects. Small tools allow children to work alongside you in the garden, play while learning skills. Tucks like diggers and bulldozers let them descend into rocks, dirt and sand and move objects around. And what child wouldn’t love a net and a bug box to observe their captured creatures?

Turbeville said for slightly taller kids, he carries a variety of ball games, from a Wicked Big Kickball to a bucket ball game where you lay out three-foot-tall buckets in a pattern and then throw balls into them. beach balls. It’s an easy game that anyone can play. The Slime Ball Dodge Tag is also popular, he said, where you wear vests and throw green latex balls that stick to the vests.

Bows and arrows remain an evergreen favorite for backyard competition, along with good ol’ lawn darts, which come with safer tips than the toys of yore that could lead to trips to the ER.

Jean Elliott, owner of Fundemonium in Rohnert Park, said a popular game on his shelves is Stomp Rockets. You attach a foam rocket to a tube which is connected to a pillow. Tap the pillow and it pushes air through a tube into the rockets, launching them.

“It’s just a fun running game,” she said, that sparks the imagination while getting you moving. She sells a set made by the DNL company for $19.99, but there are other variations on the market.

One of the hottest outdoor games today are old-fashioned cornholes. This is a variation of beanbag tossing or horseshoes, where you toss beanbags into holes. The variations and novelty themes of this game are endless and span 24 pages on Amazon. Get a set with your university colors and mascot or sets in red, white and blue for your next 4th of July barbecue.

Another great item are polystyrene gliders, which are foam planes. They’re really tough and you can fly them across the yard or across the street, see who can fly their glider better or land better,” she said.

With summer on, it’s a great time to stock the garage with entertainment to get everyone running outdoors. Go for the old vigils and add a few new attractions.

For a big 4th of July party hit that will produce an explosion but no fire, try the Mentos Science Experiment. Turbeville said you can get them in sets. You put Mentos mints in a soda bottle, which will then trigger a huge geyser gushing up to 20 feet. Almost as cool as fireworks – but legal.

2019-06-21
Previous Post: 10 board games for July 4th
Next Post: The Ultimate Guide to Group and Outdoor Games Around Philadelphia