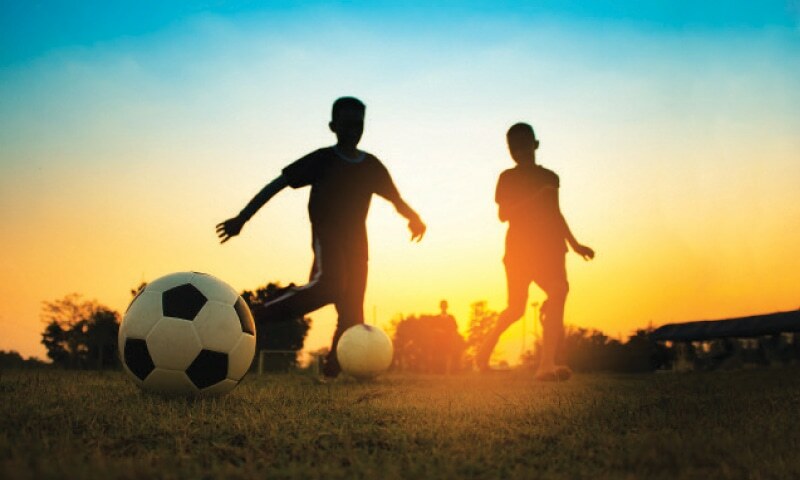 Ahmed liked to play sports. Every day he used to go to the park to play with his friends in the afternoon. He and his friends always refresh after playing physical games like cricket, football, tag, hide and seek etc. for about two hours in the park. They made their days interesting by choosing different games for each day.

Ahmed really enjoyed his routine until the day he learned that his father had been transferred to another city, which meant that they had to move. At first Ahmed was excited, but moving to a new city meant a new location, a new school, new friends and new neighbors. Which also meant he wouldn’t be in as much contact with his friends as he was now. It made him sad, but he couldn’t change his situation.

After some time the whole family moved to Lahore. Ahmed tried to get used to his new home and his new city, and one day he thought of going to the nearby park. Upon arriving there, he saw two elderly people walking and two toddlers playing with their parents. There was no one his age, so he decided to look for people his age in his neighborhood.

He rang the bell of one of the houses. A boy his age opened the door. Ahmed was delighted to see him. Ahmed introduced himself and asked the boy if he could come play football with him. The boy showed no interest and replied that he was already playing football on the smartphone with his friends online.

Ahmed didn’t give up hope, he thought maybe someone else in the neighborhood would come and play with him. So he went to another house and rang the bell. The door was opened by a servant. Ahmed asked if he could speak to someone in the house.

The servant replied, all family members present are either busy or sleeping.

Ahmed felt discouraged, but since there were many houses on the street, he thought of trying one more time. A few houses away, Ahmed saw a boy, a little older than him, sitting on the stairs of his house, but he seemed to be engrossed in something. Approaching, Ahmed saw that the boy was hunched over his mobile phone in his hands. He approached the boy, who didn’t even notice anyone approaching him. Ahmed noticed that the boy was playing a game.

Ahmed was sad, but decided to talk to the boy anyway.

“Hey, my name is Ahmed, I’m new to this area. Do you mind if I sit with you for a while? Ahmed asked happily.

The boy looked at Ahmed and reluctantly replied, “Yeah, okay!”

Ahmed sat next to the boy, but found it awkward when the boy again got busy with his cell phone. So Ahmed stood up immediately and said, “I think I should drop by another time.”

The boy was happy to hear that and said, “Yes, of course, come another day.”

Ahmed returned home sadly. Since he has never played online games, he wondered, “How can phones or tablets replace physical games?”

Ahmed tried the next day, and even after, but everyone refused to play with him. Ahmed became disappointed. His parents noticed Ahmed’s sadness and asked what was going on.

“I don’t want to live here! Nobody plays with me,” Ahmed said dejectedly.

Her father smiled and said, “What’s wrong if no one comes with you. You are your own team. Play, run and watch nature,” his father said reassuringly.

Ahmed was reluctant, but the next day he returned to the park. This time he saw a girl his age sitting on a bench with her grandparents. Ahmed had his ball with him, so he went up to her and asked her if she wanted to play.

It was as if the girl was also waiting for someone to play with. She was thrilled with this chance to play in the park.

After playing football all night, the two kids shared their feelings about physical play and discussed how they could involve other kids with them. That night, Ahmed discussed the matter with his father for advice and they eventually came up with a plan. According to the plan, his father called all the children in the neighborhood to his house and told them, “There is a mysterious gift for you in the park, whoever finds it first will keep it.”

The children were very excited and ran to the park. All the children were looking around, under the benches, under the thick grass, in the pots and everywhere they could think of. They couldn’t find anything that looked like a mysterious gift. They were all very tired and ran towards Ahmed’s father, who was thinking on a bench, noticing everyone.

“Where’s the mystery gift?” asked one of the tired children.

Ahmed’s father told them, “It’s okay if you haven’t found anything that you think is a mysterious gift. But tell me about your experience. Didn’t you have fun with each other during the search? Your children were running after each other, taking a closer look at the flowers and plants while looking for the gift? Didn’t have fun in the park?

“Yes it was fun! We came here after a long time and I hadn’t met my neighborhood friends for a long time,” one of the children added.

“Dear children, this was the mystery gift I wanted to give you – the chance to play in the park with each other and have fun. You are meant to play not with your phones, but with your mind and body. “You have to sharpen your mind and your body, and that’s only possible by playing physical games. Smartphones don’t make us physically smart. For that, you have to play physically,” the dad told them. ‘Ahmed.

Now that he had developed an interest in children, he told them about the many benefits of playing outdoor games. Soon, most kids realized the importance of playing physical games and felt that playing with kids in person was more enjoyable than playing with friends online. The children then promised to come every day to play in the park.

Ahmed was delighted to hear this as it was his dream come true. He realized that with a little thought and smart effort, we can always make the changes we want to see in our surroundings.