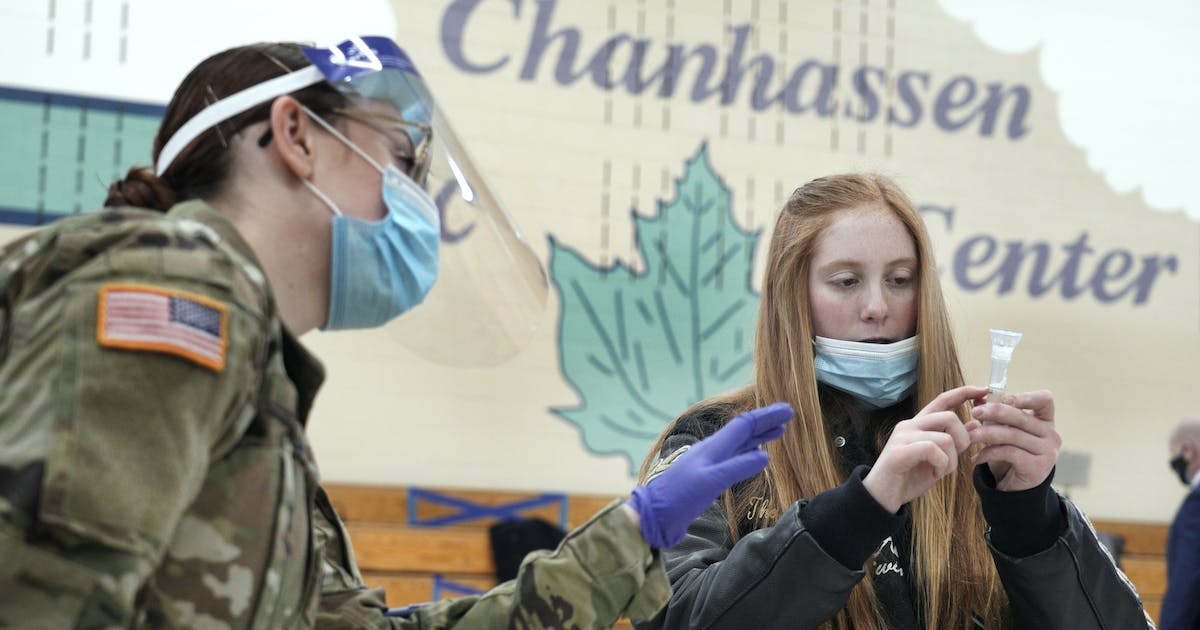 Young athletes are no longer required to wear masks in outdoor competitions for the prevention of COVID-19, state health officials said Thursday while urging them and all middle and high school students, to be tested to slow down the pandemic.

As key indicators of pandemic activity such as hospitalizations stabilized, the Minnesota Department of Health reported a record 1,088 infections with the coronavirus that causes COVID-19 in students from kindergarten to preschool. Grade 12 during the week ending April 17.

Only 10% of infections in children and adolescents produce serious illness, but the rest can fuel the viral spread, said state health commissioner Jan Malcolm. â€œEven a child who is mildly ill or completely asymptomatic can transmit the virus to more vulnerable people in their family or community at large. “

Tests are recommended every two weeks for middle and high school students, and every week for athletes, referees and coaches. To increase access, the state on Thursday offered to provide school districts and sports clubs with free postal kits to test students and athletes.

â€œWe all want to make sure our students can attend prom and graduation ceremonies and all that comes with a great end of a school year,â€ said Heather Mueller, Education Commissioner of the State and mother of two high school students. “Testing is one way to get that.”

Outdoor mask relief was requested last week by a Minnesota State High School League advisory committee. Masks under the new policy are optional for athletes in games or outdoor matches, but still required for most indoor team competitions and for anyone on the sidelines or on the benches.

The move garnered measured support from Let Them Play MN, an advocacy group that opposed Minnesota’s hiatus on youth track and field in November and the wearing of the mask and restrictions that followed when the game took off. resumed in January.

The group in a lawsuit alleged Minnesota lacked scientific evidence that the sport has a high risk of viral transmission or poses a risk of spreading the virus to vulnerable seniors or long-term care residents. He also documented cases of injuries when athletes lacked visibility or could not breathe during competition.

“While we are glad that an unfounded restriction has ended, Let Them Play will continue to fight until the Governor [Tim] Walz and MDH have removed all unfair restrictions on the sport, â€said Dawn Gillman, founder of the organization and mother of two multi-sport teenagers in Dassel, Minn.

Minnesota has reported 607 sports-related COVID-19 outbreaks – defined as at least two infections among members of the same team who have no other source of transmission in common.

Outbreaks sometimes involved viral transmission in social activities after games and practices, but Malcolm said there was ample epidemiological evidence for the role of sport in community transmission of COVID-19. Genomic sequencing of a sports-centric outbreak in Carver County this year has shown transmission between teams, schools, daycares, fitness clubs and workplaces.

Increased testing will find more infections before the virus spreads in these groups, Malcolm said. “We want to find all the cases that we can find so that we can interrupt these chains of transmission.”

It is not known whether schools and students will seek more tests. The Department of Health received several reports last fall of high school teams engaging in no-test pacts to avoid potential quarantines if a player were infected.

About 139,000 COVID-19 tests have been performed as part of a state pre-K-12 program that offers testing to staff every two weeks. Districts learned Thursday that the new expansion will also offer testing to students, but had not made a decision on that.

“We need to look at what it would take from an operational point of view and find out more about [state] supporting schools to make the testing program run as efficiently as possible, â€said Barbara Olson, spokesperson for Osseo area schools.

The one-week record of infections among K-12 students in the week of April 17 occurred without a similar growth among educators. The 178 pre-K-12 staff infections this week compared to a high of 758 in mid-November.

At least 69% of K-12 educators have received the COVID-19 vaccine, which health officials say has controlled the spread in this population. However, the state reported a sixth death in the pandemic of a pre-K-12 educator on Thursday.

Overall, more than 53% of eligible Minnesotans aged 16 and over have received at least a first dose of the vaccine, including more than 85% of the elderly who have suffered the majority of deaths from COVID-19.

Minnesota reported another 10 deaths from COVID-19 and 1,973 infections on Thursday – bringing its pandemic total to 7,054 deaths and 562,420 infections. Hospitalizations for COVID-19 in Minnesota increased slightly to 683 on Wednesday and included 196 people in intensive care.

Health officials have urged adolescents 16 and older to get vaccinated in addition to testing, especially with some providers reporting greater availability.

St. Luke’s in Duluth announced it had openings for vaccination this week and recommended that students get the vaccine.

People no longer have to be a ‘computer ninja’ to book online appointments or worry about other people who need their vaccines more first, said Kris Ehresmann, director of the state of infectious diseases. “Thanks for letting the others go first, but it’s OK now to take your place in the line.”