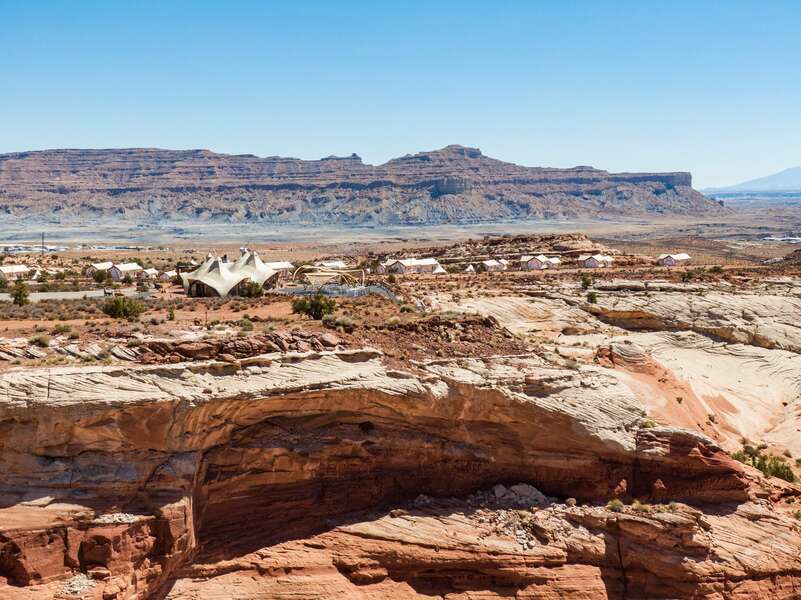 Go glamping near national parks with Under Canvas

In any other situation, I would have peed my pants. It was the middle of the night – which in dark-sky certified southern Utah is…really dark – and a lone coyote howl pierced the silent night. Soon his howl was joined by a chorus of these carnivorous beasts, each animal seemingly attempting to outdo the others in volume.

Where was I? Oh, you know, just in a tent, perched on the highest point of Under Canvas Bryce Canyon. But fortunately, I had already been informed that the sound carries incredibly far in this part of the world; and that these nocturnal predators were (probably) actually much further away than their somewhat terrifying howls would lead me to believe. (Also, the staff at check-in had already warned us about the strict no-food rule in the tent, so unless it’s human-hungry coyotes – which, yes, is little likely – I thought I was safe.)

But being so close to nature was kind of the reason I embarked on this adventure in the first place. Sure, we have our pizza rats and the jungles of Midtown New York, but when have I ever seen a living hare or looked up and been able to spot more than five stars in the night sky?

Also, let’s be honest: I was not in a small tent. I was in a custom-built, Scandinavian-inspired glamping tent, heated by a wood-burning stove, with a flush toilet, heated shower, and a king bed located under a perspex skylight designed for viewing. stars. And so, rather than worrying about me being a wild dog dinner, it was kind of exciting. I could, no kidding, count the stars until I fell asleep again.

Such is the magic of Under Canvas, a collection of 10 campsites scattered across the United States that marry unspoiled landscapes like Yellowstone or the Great Smoky Mountains with safari-style tents that can appeal to everyone from hardcore hikers to complete novices (me). Each location is located near its national park or outdoor recreation area, but far enough away to feel off the grid. The company’s philosophy, as CEO Matt Gaghen told me, is to help travelers create “meaningful experiences in nature that allow them to connect, explore, and be outdoors together.” .

Such was the case for me; I spent three nights at the company site in Zion before heading to Bryce National Park for three more. Our mornings were filled with rigorous hiking (thanks to 57 Hours and our guide Lindsey for helping us navigate the treacherous Narrows in Zion, and Canyon Fever Guides for showing us the Queens Garden trail in Bryce), but the coordinator from the hotel’s on-site guest experience can help arrange anything from canyoning to UTV tours to white-water rafting.

The history of the McRib

These women-led hiking groups bring diversity to the outdoors

“Growing up, I didn’t really see a lot of people who looked like me doing the outdoor activities that I loved to do.”

When our legs felt like jelly, we retired to camp for peaceful afternoons of communal hammock or board games in the main hall tent, before digging into dinner outside. Mealtime here means perfectly tender, flaky salmon fillets with white wine-braised greens or juicy bison burgers piled high with bacon: dehydrated meal packets, it’s not. “We take inspiration from the local climate and agriculture,” Gaghen says of the kitchen.

Each camp offers a different menu, which has been influenced by both the camping lifestyle as well as site-specific ingredients and cultures. One evening, while at Bryce’s location, the special dessert was cheesecake topped with an enigmatic prickly pear sauce; the prickly cactus had been carefully and slowly stripped of its spikes by the kitchen staff before being reduced to a subtly sweet mash. It’s a dedication you don’t find in many restaurants, let alone a campsite.

There are also free s’mores every night, which encourages guests to swap stories while roasting marshmallows in one of the many fire pits. I for one got some solid information about Zion hikes from a lovely couple in Phoenix. Under Canvas also encourages group interaction in other ways, such as quiz nights, communal stargazing, and adult coloring sessions. So finally, with full bellies, we lumbered back to our tent, lit a crackling fire in our wood-burning stove, and snuggled up under layers of fluffy blankets.

The best places to stargaze in the United States right now

It was especially exciting sleeping at Bryce, which is the company’s 10th and newest location. What makes this camp even more unique is its power source; it’s the first Under Canvas to be entirely solar-powered (the array panels are tucked away out of sight so they don’t spoil the view of the hills). Gaghen tells me that the decision to run the camp with eco-friendly energy was quite natural: “Throughout our company, we share a love for the outdoors and as part of that, we’re committed to our philosophy of a “conscious approach”; be stewards of the environment and reduce our carbon footprint,” he says.

Southern Utah sunshine is more than abundant to power all camp needs, from cooking to water heaters; so much so that the Zion property recently added solar panels. Under Canvas also plans to implement the cost-saving technique in several of its current and future camps: “In addition to doing good for the planet, solar power also allows us to operate in really remote and “off the grid”, Gaghen adds.

While the company added its 10th campsite in its 10th year, there are plans to open many more. “We look forward to the continued growth of the Under Canvas brand and continue to be a leader, innovator and changemaker in sustainable travel,” Gaghen said. If my experience is any indication, repeat customers will be common. Many of those we met on both sides had visited other places or intended to do so in the future. I knew next to nothing about Acadia National Park until this trip, but am now actively trying to get there, just to stay at the beautiful Under Canvas property near the water. Hopefully there are fewer coyotes there.

Juliet Izon is a Thrillist contributor.