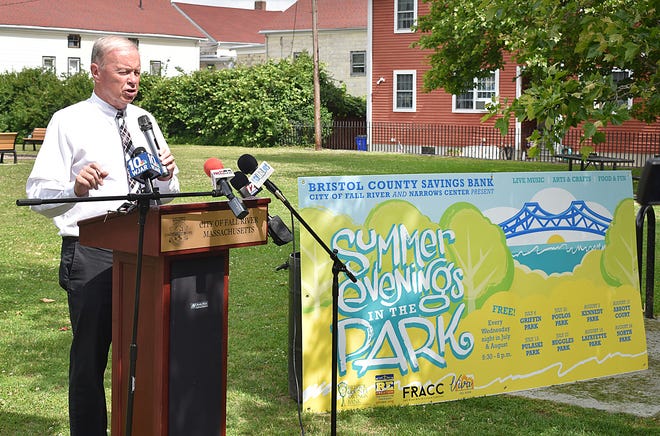 FALL RIVER — The free summer concert series that launched last year to bring neighbors together during the pandemic is back, with plans to involve twice as many local parks as last summer.

“Last year, coming out of COVID, we wanted to get people out in neighborhoods and that was a resounding success,” Patrick Norton, executive director of the Narrows Center for the Arts, told a news conference. at Griffin Park on Wednesday to officially announce the 2022 “Summer Nights in the Park” series of events.

The Narrows is one of the program’s sponsors, along with the City of Fall River, Bristol County Savings Bank, Viva Fall River and Greater Fall River Re-Creation.

Norton described the concerts as “holistic” events which, along with live music, will include free arts and crafts for kids, free hot dogs and burgers and a free bag of groceries for each family. who attends. He expects about 500 people at each concert, he said.

Musical acts will include the New Orleans-inspired Southcoast Brass Band, the Marcus Monteiro Trio and the Dirty Water Brass Band.

Last summer, eight concerts took place in four different parks. This year it has expanded to include eight parks across the city that will each see a concert in July or August.

“This is a partnership to make Fall River a better place to live,” Mayor Paul Coogan said at Wednesday’s press conference. “These things (last summer) were exciting, they were dynamic and they had a lot of activity.”

Patrick Murray, president and CEO of Bristol County Saving Bank, which is contributing $10,000 to the program, touted the concerts as a bright spot during a time of increased isolation due to the pandemic and added stress from the price increase.

“It’s exciting to know that free, high-quality entertainment is literally going to kick off here in a few weeks,” he said.

Corky Row Neighborhood Association President Mark Conrad pointed out that Griffin Park, the location of Wednesday’s press conference and the series’ first concert, was the site of a fatal shooting that rocked the Corky neighborhood. Row last May. The concert series, he said, shows that the interest of neighbors and city leaders in continuing to strengthen the community after the shooting has not waned.

Anyone who says nothing good is happening in the region is wrong, he said.

“There’s something happening all the time that shows the real soul of the city and how awesome it is,” he said.

Audrey Cooney can be contacted at [email protected] Support local journalism by purchasing a digital or print subscription to The Herald News today.

2022-06-23
Previous Post: Golden Gate Park is one of the largest urban parks in the United States
Next Post: The Weather Network – Add extra fun to your summer plans with giant outdoor games