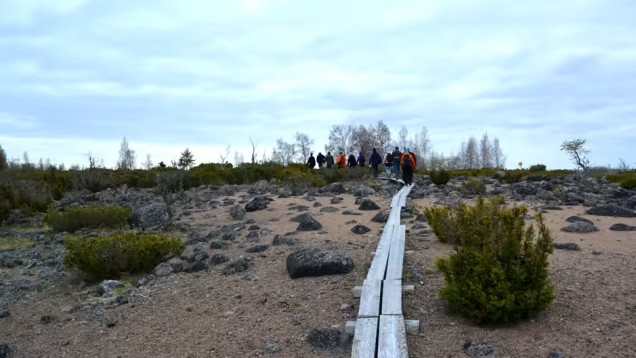 Take a look at what continues to draw thousands of people to remote and pristine natural areas across the country.

In the first two years of the Covid pandemic, 2020 and 2021, Finland’s national parks and other natural sites have become extremely popular domestic travel destinations, but it seems that other attractions are increasingly competing for the attention of people.

Although official summer visitor numbers are not yet available, the parks have seen a slowdown in traffic, according to Pirkko Siikamakiregional director of the national forest management agency, Metsähallitus.

The drop in visitor numbers may have something to do with the fact that many people have trip abroad this summer for the holidays.

“Last year, natural sites were more popular than ever. It’s quieter now, although there are still a lot of visitors,” said Siikamäki.

However, interest in national parks had increased even before the Covid pandemic, Siikamäki noted, so their popularity is expected to remain high.

In 2021, the agency noted that the number of novice hikers, mountain bikers and young people visiting outdoor destinations had long been increasing, along with an increase in the number of families camping with children. The number of overnight stays in national parks has also increased steadily.

According to Metsähallitus, Finnish national parks welcomed more than four million visitors in 2020, an increase of 23% compared to the previous year.

The parks were so popular in 2020 that cars lined up to enter Oulanka National Park in Kuusamo. The year saw the number of visitors to the park increase by more than 45,000 compared to 2019.

Syöte de Pudasjärvi National Park in northern Ostrobothnia also saw one of the biggest increases in visitors in 2020, surpassing the 100,000 mark by a significant margin. The number of visitors increased by 35,000 compared to 2019.

Repovesi National Park in Kouvola and Mäntyharju also saw a sharp increase in visitor numbers in January 2020. It recorded up to eight times more visitors than the previous year, almost 6,500, compared to around 800 in 2019.

Most popular Pallas-Yllästunturi in 2021

The most popular destination overall was Pallas-Yllästunturi National Park in Western Lapland, which attracted nearly 700,000 people in 2021. Urho Kekkonen National Park, also in Lapland, was the second most visited .

Meanwhile, Nuuksio National Park in the municipalities of Espoo, Kirkkonummi and Vihti near Helsinki came third.

“Last year showed that first-time visitors came to stay in national parks,” Henrik Janssondirector of Parks & Wildlife Finland in Metsähallitus, said of the park’s 2021 visitor numbers at the time.

The north attracts the most visitors

Growth in visitor numbers in 2021 has not been uniform across Finland, however, with parks in the Northeast region and Lapland seeing the biggest increases.

The agency said visits to northern parks had increased thanks to an overall increase in domestic tourism and remote working.

Although visitor numbers to the southern parks declined from 2020 to 2021, numbers were still higher than in pre-pandemic years.

According to Metsähallitus, the number of visitors increased not only in northeastern Finland but also in Lapland in 2021.

Of all the national parks in Northern Ostrobothnia, Rokua saw the biggest increase, with visitor numbers tripling to 63,000 from the previous year.

Metsähallitus has been monitoring visitor numbers in national parks since 2001 using visitor counters installed in the field.

Online services for nature travelers were also used more than the previous year. The number of individual users of the nationalparks.fi(siirryt toiseen palveluun) the service grew by 49% to reach 3.2 million users.