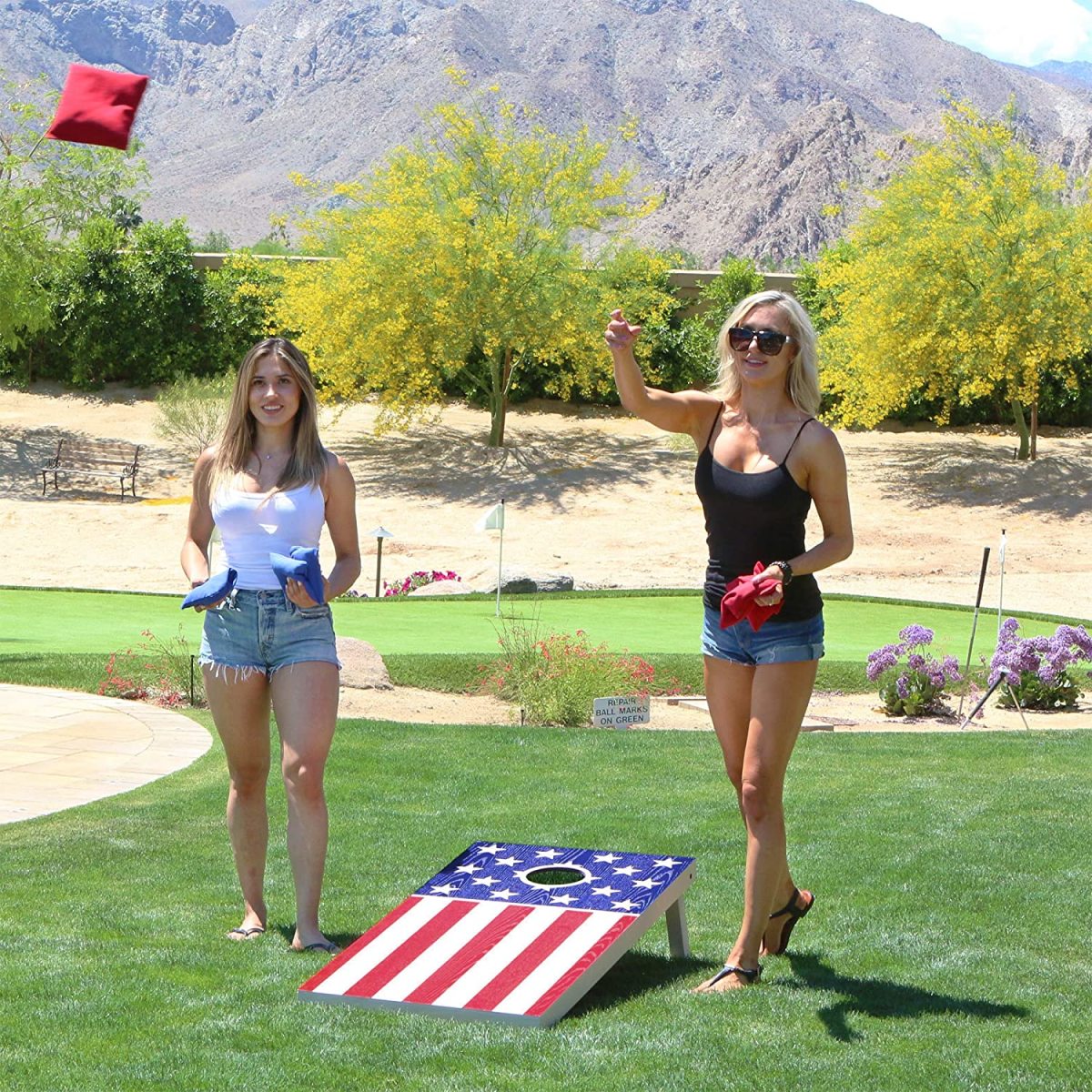 When the sun shines and family and friends gather in backyards and on beaches and parks to share food, drink and camaraderie, the lasting memory can be the games they played that had a good time.

And there is data that backs up that sentiment. According to a study from the UK-based University of York, games and activities lasting 20 to 90 minutes lead to the most positive results for improving mood and reducing anxiety.

Of course, some games are more fun than others. That’s why we’re listing the 15 best outdoor games for summer and fall. Play one or play all 15, and see how fun competition in games can keep you mentally and physically active and fit.

Arena Media Brands, LLC and this website’s respective content providers may receive compensation for certain links to products and services on this website.

By many accounts, the cornhole tops the roost as the best outdoor game for beaches, backyard barbecues, and tailgates, among other popular outdoor social landing spots.

Cornhole is easy to learn, fun to play, and any age group can learn to toss a beanbag over (and through) a wooden or fabric board on the ground 20 feet away.

So grab a beer, iced tea or other drink of your choice and host a cornhole tournament at your next outdoor party.

If you know how to swing a tennis racket or a ping pong racket, you can swing a beach racket – as many people do on beaches across the country every summer.

Like cornhole, beach paddle is a popular game because people of all ages can play it and can accommodate as many players as you have paddles.

The rules are also quite flexible. Whether it’s a one-on-one match or teams of five, all you have to do is draw lines in the sand and start paddling, the goal being to make sure you the ball does not touch the ground. Play with or without a net and play games where the winner is determined by the first team at five, 10 or 15 points.

Jenga has always been a great game for everyone, young and old. Families with young children will also love the easy to learn and play game.

Now Giant Jenga takes things up a notch, with Jenga’s original strategy of blocking, stacking and balancing now oversized for play on concrete, patios or a well-mowed lawn. Play two or play 20 – Giant Jenga has room for everyone in an outdoor setting.

Let’s take the traditional route with an old game chestnut – croquet. Popularized in the late 19th century and early 20th century, croquet can be played by anyone who appreciates the value and pleasure of taking a wooden mallet and hitting a round ball through a hoop in the ground, and kicking it. do it in the right order. Most points win the game.

Croquet is simple and can be played on a flat grass (or artificial grass) court with six to eight players, depending on the croquet game you choose. It’s ideal for picnics and barbecues – and feel free to pack a beverage of your choice as you cruise the croquet circuit.

A great way to scale down the Frisbee experience for a backyard or beach gathering is with the Kan Jam Original Disc Throwing Game.

Instead of having to walk across an entire football field, the Kan Jam frisbee lets you play the game at 20 paces, with the goal of throwing a smaller frisbee at an opponent’s box on the ground. Although hitting the can is the name of the game, any throw in the bobbin slot crowns an immediate winner of the game (he’s first at 21 otherwise.

The game can be played anywhere and by anyone, with a glow-in-the-dark version for frisbee action after dark.

Chess has long been known as the thoughtful person’s game – it is known for developing critical thinking skills and for refining on-field decision-making. It’s also a game that chess purists have played outdoors, especially in parks and cafes, where the fresh air and camaraderie enhance the intellectually competitive experience.

So why not add a puzzle game like chess to your list of outdoor activities? Chess can be a particularly great learning tool for youngsters, while allowing older friends and relatives who are still not able to play more aggressive sports games. Try it and lower your brain to sweat too.

Variations of capture the flag have been played for centuries – we bet you didn’t know the game was played during the Civil War as a way to let soldiers blow off steam during long periods of boring inactivity. In recent decades, capture the flag has become a neighborhood game, usually reserved for children aged eight and up. The game is often played at night too – so why not give capture the flag a new dose of adrenaline and play it at night, with ‘glow in the dark’ features?

The venerable Italian actually spread (literally) to ancient Egypt, but rose to such popularity that international travelers took the game to England, France and Italy, where it is still celebrated and played by locals. pétanque bowlers today.

Today, the game can easily be played at family parties, barbecues and neighborhood gatherings, and for less than $50 for a good set of bocce balls, with options for “hard” bocce balls or ‘soft’, depending on who is playing the game. Game. Pétanque can be played on grass or sand, and a whole generation of families can get in on the action.

Any college kid knows the beer pong affair, one of the most intoxicating table games (okay, literally) in fraternity history.

Now you can do do-it-yourself beer pong outdoors, with a giant beer pong, which replaces the red solo cups as targets with larger, clean cans of your choice – plastic garden cans, Household buckets of water or even trash (preferably clean) cans can do the trick.

Add a soccer ball or volleyball and 20 feet of space and you’re ready to play with the gang. Be sure to save the red solo cups for the actual drinking phase of the game.

Most importantly, keep the juvenile drinking set away from beer pong of any size – and cap the cans when you’ve had your fair share of cold beer.

Okay, we can’t pass up beer pong, at least until we’ve quenched our thirst.

So let’s add floating beer pong to our list of outdoor activities. You need a pool for this event and a floating pool raft (GoPong offers one ready-made with built-in coolers and plastic cup holders included.)

Unlike regular beer pong, where ping pong balls bounce off a table and into the cup, beer pong is more like free throws in basketball, only with floating balls. A bonus: when you’re done playing, the floating raft acts as a ready-to-go cooler for your drinks – adults or otherwise.

For tight spaces — think smaller yards, walkways, and patios — Spikeball is a great game at parties that promote fast action and, best of all, quick reflexes.

The game is modeled on volleyball, but in a reduced way. All you need is four players, a mini volleyball net, and a stable playing surface. Think of Spikeball as a combination of ping pong and volleyball and you get the idea. The idea is to pass your Spikeball to your competitors on the other side of the table – the loser buys/gets the next drink.

Like cornhole, beer pong, and volleyball, ring tossing has its outdoor origins in older, more traditional games like horseshoes and lawn darts.

Since you don’t want to throw horseshoes or sharp darts around an outdoor party with kids and inattentive humans, try the Ring Toss game from Elite Sportz Equipment. It’s safe, easy to play and can be used indoors or outdoors, depending on the weather.

Ring Toss Game is easy to set up and user friendly to play. Components include three sets of rings and a wooden base. Three layers can match at once, with the player landing the most “rings” winning.

The original cornhole is an outdoor party classic, so it’s no surprise the game has spawned offshoots that offer the same premise (throwing an object into a hole) but with different tools.

The same goes for beanbag buckets, a “throwing” competition much like cornhole, but only with throwing beanbags and seven buckets with varying distances and point totals. First team to 21 first place sacks.

Bean Bag Buckets can be played by any age group and can be easily played on sand, grass, driveways, large patios, and even dirt parking lots for tailgating enthusiasts.

Ballpark aficionados may recall Strat-o-matic, a board-based baseball game that allowed players to match statistics of major league baseball players and use dice rolls to move players around bases and on the scoreboard.

The table baseball is cut from the same horse skin. The game, developed by baseball fans Ryan and Kim McDaniel of St. Louis, Mo., can be played on any hard surface – picnic tables, patio tables or even on a beer cooler, if you want.

Two teams of up to four players use dice rolls to move players from base to base, with a dry-erase board attached as a scoreboard. Players can choose boards with the names and logos of their favorite MLB teams, so matching the Red Sox-Yankees or Cardinals-Cubs, for example, is easy to do.

Golfers can play, so to speak, with a portable practice net that allows shooters to shoot at targets at varying distances on a lawn, beach, or fairway.

Play for a drink or play for pride – the important thing is to bring your golf wedges and play at your next outdoor party.

Prices are correct and items in stock at time of publication.