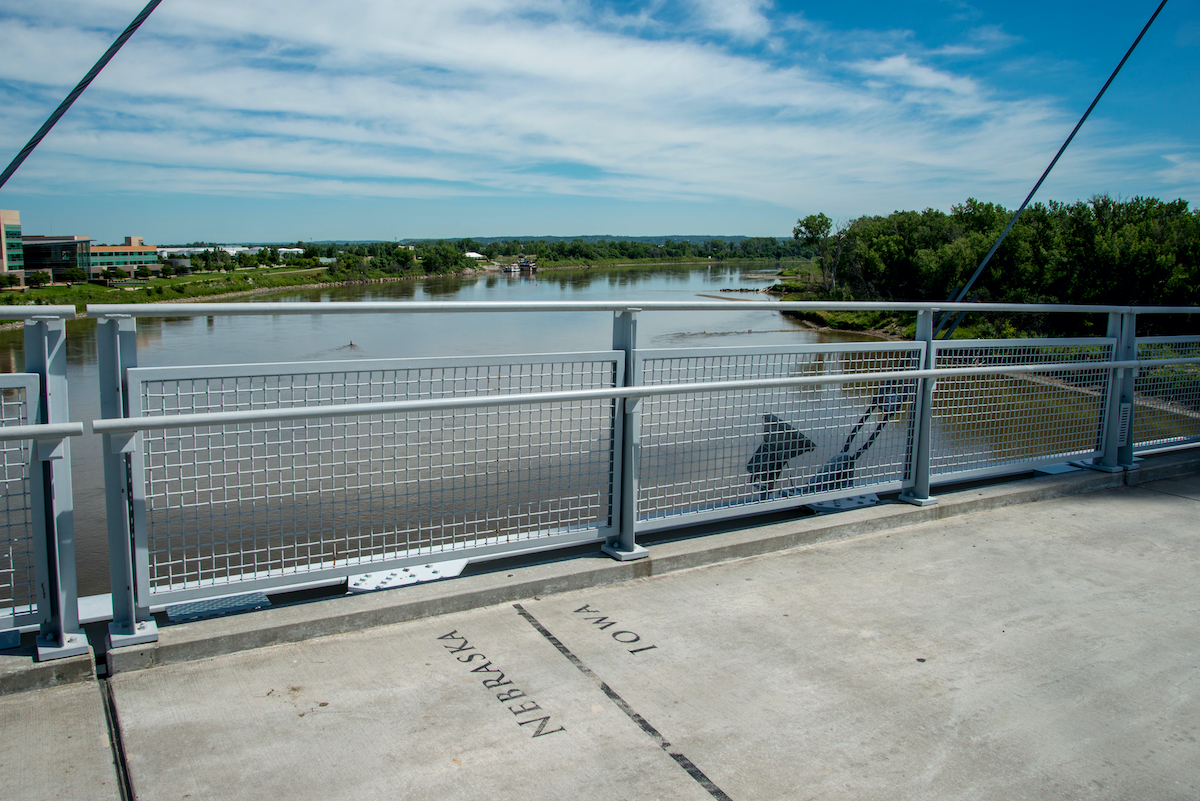 Whether you’re a fan of nature, urban trails, or amazing outdoor art, you’re always within 30 minutes of Omaha’s fantastic attractions. I love showing off my city and all it has to offer, and outdoor activities and fun are key to any Omaha experience. From an urban forest to murals celebrating its ethnic melting pot, it’s fun to soak up the sun and fresh air while exploring Omaha’s wilderness.

Fontenelle Forest is Nebraska’s only urban forest, with over 17 miles of trails. Stroll among century-old trees on the mile-long Forest Walk or explore the forest along its unpaved trails that take you near the Missouri River amid the cliffs. Along the way, you’re sure to see wildlife, such as white-tailed deer, hawks, and maybe eagles.

The Fontenelle forest offers birdwatchers the chance to see winged stars, such as woodpeckers. If you’re brave enough, don your safety gear and zip through the forest’s Tree Rush Adventures zipline course. Consisting of seven courses from beginner to advanced, the zipline challenge consists of rope and ladder obstacles, starting about 20 feet above the ground, with the black course – the most difficult – at 55 feet high .

Fontenelle Forest is also home to a raptor recovery centre, with large birds – such as hawks, owls and vultures – unable to survive in the wild.

Stand in two states at the same time

Anchor the edge of the Omaha River, the 0.75 mile long Bob Kerrey Pedestrian/Cycling Bridge connects Nebraska and Iowa across the Missouri River. At any given time, you can stand in two states at the same time. The bridge is the centerpiece of Omaha’s waterfront, with the regional headquarters of the National Park Service, including a small museum showcasing the Lewis and Clark Expedition, and other attractions.

Connecting the riverfront to Iowa’s hiking trails, it’s easy to see why this is one of the area’s most popular attractions. You will find OMAR the Troll at the foot of the bridge, a nice sculpture and a nice place to take pictures. The Iowa side is home to Tom Hanafan Park, with an amphitheater, public artwork, and walking paths.

The Bob – as he is affectionately known – has his own Twitter account, @BobTBridge. With its impressive views of the Omaha skyline, free summer concerts are held at the foot of the bridge.

Pedal boats take you to the lake in the park. In addition to vintage cabins, the state park offers glamping cabins and six “tipis” with sleeping accommodations. Located midway between Omaha and Lincoln, Platte River State Park also includes fishing.

A nice place in the middle of the city

An urban botanical garden in northwest Omaha OPPD Arboretum features a variety of trees, plants, and shrubs native to Nebraska. With woodchip trails that take you over hills and through the woods, the nearly 1 mile trail is an oasis in the middle of the city. The park was designed to include plants that help attract wildlife.

A gazebo features information panels about how the utility is working to improve energy use in its service area. With landscapes perfect for photography, it is also a beautiful place to enjoy a picnic.

Named for Chief Ponca Standing Bear, the Lake features a pontoon bridge as part of its 3 mile trail. You will be a few meters above the water when you cross the bridge. Although located in one of Omaha’s growing areas, the view along the lake trail is one of the best in Omaha, mixing woods and open areas. The lake is open for fishing, light boating and picnicking.

Considered the center of Omaha’s once bustling African-American business district, ” The devilas it’s called, is enjoying a resurgence with murals, parks and museums showcasing self-guided tours. As you walk through the area, you’ll find more than a dozen buildings listed on the National Register of Historic Places, including the Jewell Building, home to the historic Dreamland Ballroom, which has hosted stars such as Dizzy Gillespie and Ella Fitzgerald .

The Deuce the resurgence includes a variety of new businesses and existing businesses that are doing well. Here you’ll find sculptures acknowledging the area’s jazz history and paying homage to Mildred Brown, once the only African-American woman to own a newspaper in the United States. The Great Plains Black History Museum features rotating exhibits on Omaha’s African-American history.

Considered Nebraska’s most popular state park, Mahoney is home to several kilometers of hiking trails. Guided horseback tours take you through the park, providing an experience with its changing terrain. The Go Ape zipline course offers a variety of levels as people negotiate obstacles, such as wooden bridges and high cables, before riding a zipline for the next challenge.

For the less adventurous (myself included), ride a pedal boat on a small lake or walk along a paved path leading to a botanical garden. Soak up impressive views of the Platte River Valley with a climb to the top of Nebraska’s tallest observation tower. Eugene T. Mahoney State Park also offers fishing and camping (cabins included).

Omaha’s wetlands are home to wildlife and beautiful views

Just a few feet from one of Omaha’s busiest streets is an urban wetland. Oxbow-shaped, spring-fed heron haven is a favorite for nature walking, culminating in views of wildlife and waterfowl at the pond. Among the animals you can see along the half-mile round-trip trail are herons, ducks, geese, and turtles. With an accessible trail (including a boardwalk), you’ll walk among the state’s native trees, smell the flowers, and watch pollinators at work.

With nearly 20 gardens, you can spend a day exploring everything Lauritzen Gardens has to offer, such as the Rose, the Daffodil or the British Gardens. Some gardens focus on Omaha’s ethnic history and international relations, such as the Japanese and Lithuanian gardens. The Marjorie K. Daugherty Conservatory includes exhibits showcasing both temperate and tropical environments.

In addition to seasonal displays, Lauritzen celebrates the holiday season with dozens of varieties of poinsettias, including a 20-foot-tall Christmas tree made from poinsettias. The Botanical Garden is also home to the largest outdoor model railway in the world, with trains running through a wooded area.

With more than 20 murals located in South Omaha, you can trace the city’s immigration history from Native Americans to Irish, Eastern Europeans and Germans, ending with Latinos. Murals created by artists associated with the South Omaha Mural Project embrace the ethnic history of the city.

Murals run along the walls, including a painting of Polish heritage at Dinker’s Bar and Grill (home to some of the best burgers in town). Lithuanian Bakery is the place of Lithuanian historical mural. While you’re there, come and taste one of the bakery’s delights, including the mouth-watering Lithuanian pie.

walk along deske Street, you’ll see classic architecture—like the U.S. Post Office, which once served as South Omaha’s City Hall—mixed with art. 24e The street corridor offers a glimpse of the Native American and Latino influence of the area. While there, visit El Museo Latino, a Hispanic museum, as well as sample shops and restaurants.

It’s not our parents’ Gene Leahy Mall more. After undergoing a major renovation, the downtown park was transformed from a pedestrian path below street level along a canal to serve as the centerpiece of the area, surrounding the riverfront with the Bob Kerrey Bridge.

The new Gene Leahy Mall features a street-level park full of attractions for everyone. Test your skill level with a game of ping pong at an outdoor stop or watch the kids play in the fountain fountain (you might want to join them to cool off on a hot day). With a sculpture garden, plants, and other attractions along a walking path, the green space provides a breath of fresh air among the downtown skyscrapers.

Relax and have lunch in one of the picnic areas with Adirondack chairs. An outdoor concert shell allows for fantastic performances, including national acts. The Gene Leahy Mall also has a small dog park, with separate areas for large and small dogs.

Omaha has a lot to offer on the outside. For the more adventurous, you might want to head to Hummel Park, said to be haunted. People swear that every time they count the steps up the park stairs, the numbers change. Whether you want to explore Hummel Park in addition to the city’s other attractions, you’ll want to dress for the weather, including wearing comfortable shoes.

To learn more about Omaha, explore these articles: